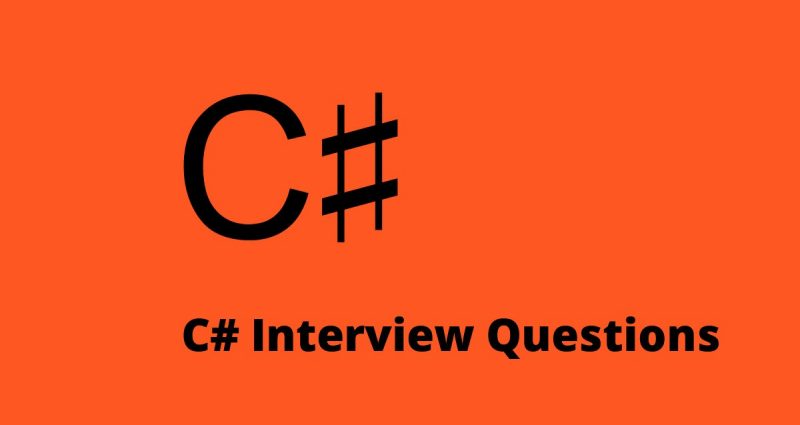 By: Ankit
In: C#, In our opinion, Technology
Spread the love

Lets quickly brush up through these top 20 most Important C# interview questions for experienced.
If you’re planning to attend an Interview on C#, and now you think, where should I focus to get prepared for C#?. Then I am bringing out this article, to make sure that you qualify. I am listing here my top 20 C# interview questions for experienced questions and their answers.
Questions asked for those having experience in C# language.

C# is an object-oriented programming language built by Microsoft in 2000 . It is type-safe , versatile,performance-oriented language and a well-managed programming language.C# that is compiled by the .Net. a framework to generate Microsoft Intermediate Language.C# running on Visual Studio gives it the utmost features of debugging and use various of its features.
C# can be used to develop all kinds of software targeting various platforms including Windows, Web, and Mobile (Android/IOS/Windows)

In c# there are two compilers:

3.Explain Encapsulation and Abstraction, and also state how it differs from one another.

You can read the full article over here.

4.Difference between Iqueryable and IEnumerable.

The List is the type-safe conversion of ArrayList, this means that there is no unboxing and boxing. So performance is good.

6. What is ICollection Interface

7.Difference between authentication and authorizaion

Authentication means the given credentials by which one user logins into the system or anything, while authorization is to give restriction to authenticated users to handle method.

[Authorized Admin ]//authenticated admin can only access this is authorization.
Public ActionResult Save()
{
}

8.What is an interface ?

The interface is an abstract class which has only public abstract methods.
Abstract Methods is just declared, it does not have any implementations.

9.What are Asynchronous programming in C#?

When we are checking with certain UI where on button click, we have a big method like reading or importing a large file, in that case, the entire application must wait to complete the whole task.

In other words, if a certain process or code is blocked in a synchronous application, the entire application gets blocked and our application halts responding until the whole task completes.

Example:
Suppose, we are using two methods as Method1 and Method2 respectively and both the methods are not dependent on each other and Method1 is taking a long time to complete its task. In Synchronous programming, it will execute the first Method1 and it will wait for the completion of this method, and then it will execute Method2. Thus, it will be a time-saving process.

We can run all the methods parallelly by using simple thread programming but it will block UI and wait to complete all the tasks. To come out of this problem, we have to write too many codes in traditional programming but if we will simply use the async and await keywords, then we will get the solutions in much less code.

Async and await are the code markers, which marks code positions from where the control should resume after a task completes.

Let’s start with practical examples for understanding the programming concept. Sample examples of async and await keyword in C#

10.Difference between all the http verbs.

Generally under every program, we will be coming across errors which are of 2 types:
-Compile Time Errors
-Run-Time Errors

-A compile-time error occurs due to the syntactical mistake that occurs in a program, these are not considered to be dangerous.

-A runtime error also known as an Exception occurs under a program while the execution of the program is taking place this can be due to various reasons like the wrong implementation of logic, invalid input supplied to the program etc., these errors are considered to be dangerous because when they occur under the program the program terminates abnormally without executing the next lines of code.

13. What happens when an exception or runtime error occurs under a program?

Whenever an exception occurs in a program on a certain line, the execution of the program stops immediately on the line without executing the next lines of code as well as displays an error msg related to the error.

As a programmer, every exception is a class that is defined under the system namespace. The parent class for all these exception classes is “Exception”.

14. How to perform Exception Handling within a program?

To perform Exception Handling we were provided with 2 blocks of code known as “try..catch” blocks, which has to be used as follows:

15.What are OOPS principles?

Traditional languages like “C” are known to be Procedural languages that don’t provide features likes Code Security and Code Re-usability.

-To provide the above features a new approach in programming has been introduced as Object-Oriented Approach.

-OOPs languages support security and re-usability, to call a language as object-oriented it needs to satisfy the following principles:
-Abstraction
-Encapsulation
-Inheritance
-Polymorphism

Abstraction: These principles talk about hiding the complexity by providing the user with a set of interfaces to drive the functionalities.

Polymorphism: Entities behaving in different ways depending upon the input they receive is known as polymorphism, which allows u to give the same name for more than 1 method present in a class.

Note: The object of the class in java & .net programming languages gets created only with the use of “new” keyword, if new is not used it is considered as a variable of the class which will not occupy any space in the memory.

Multithreading is used to execute multiple methods or multiple applications are work simultaneously.

Using multi-threading we can break a complex task in a single application into multiple threads and they execute independently and simultaneously.

Thread is a class, using this class we can create multiple threads. This class is used for creating and managing the created thread.

“ System.Threading”  is the namespace.

18. Can you explain in brief how can we implement threading?

The Thread.Start( ) method is used to start the created thread. Eg: threadObject.Start( );

The Thread.Suspend( ) method deactivates the executed thread features. This method features can be reusable in the application by using Thread.Resume( );

5.HashSet<T>
an unordered collection of the unique elements

Stack
Last In, First Out

AJAX allows the user to interact with web pages asynchronously by exchanging small amounts of data with the server behind the scenes .

2020-05-29
Previous Post: Horcruxes of life: How Voldemort’s Horcrux can be related to life
Next Post: Top 10 Luxurious Car Brands